On day 3 I broke camp at Arrow Rock and headed NW to Van Meter State Park.  This place was so quiet and tranquil – a big and welcome change from Arrow Rock and Finger Lakes.  One of the first things I saw after getting out of my car was this little guy:

It was not afraid of me at all, hopped like a kangaroo, and was about the size of a large mouse.  Needs research.

One of the trails is called the Earthworks Monument Trail and it passes through a large earthen structure built before the Europeans invaded.  Here, just read the sign:

Without the sign you wouldn’t  know anything was there but much of the “moat” is still visible:

Also on tap was the Loess Hills Trail – a loop around the lake and a nice little trail.  There was a creek bed at the upper end that was just covered in Jewelweed and hummingbirds: 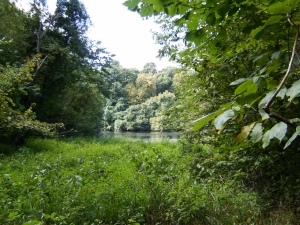 Looking from the dam to the other end of the lake:

Something new to me – tentatively identified as the fruit of Golden Seal Hydrastis canadensis: 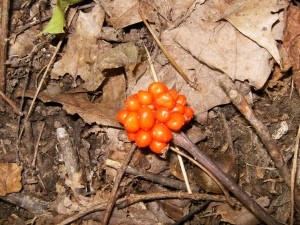 And most unexpectedly, blueberries:

Finally, here’s something from the squirrels-will-eat-anything department – part of a plastic park bench: 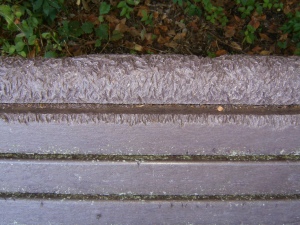 There is also a trail that leads up a hill to the Vanmeter family cemetery.  Many old stones here, some dating to the 1840’s.  The Oumessourit Wetland Bluff trail goes along the edge of a wetland area at the bottom of a bluff (duh!).  I scared up a bunch of Red-winged blackbirds but otherwise saw little wildlife.  I think you would have to spend some quiet time there to really appreciate it but I wasn’t in that kind of mood.  From the Missouri Overlook trail I was able to see a sliver of water in the far distance.

It was a pretty nice weekend.  I don’t know that any single feature would make the drive worthwhile but the combination of Devil’s Icebox and the Pinnacles should make it a pretty easy decision for anyone within 1-4 hours of Columbia.