There were a few hiking trails in the Columbia MO area that I’ve wanted to check out and I had a long weekend with no other plans so off I went on my first solo multi-day trip.  I spent most of Saturday afternoon at Rock Bridge Memorial State Park just south of Columbia.

I started on the Sinkhole Trail.  As expected, it weaved around many sinkholes (which don’t photograph well).  A point of interest here is the remnants of a farm that used to occupy the area.  Here’s one of the two silos: 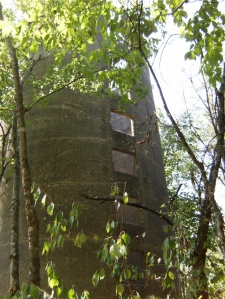 I ask you: what kind of person stands in the middle of an area pockmarked with sinkholes and says – not once but twice – “This is the perfect place for a large, very heavy and unstable concrete structure”?  On the other hand, it’s still there.

The main attraction here is definitely the very cool Devil’s Icebox.  We start with the natural bridge that used to be the entrance of the cave: 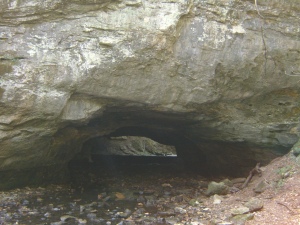 Part of the roof collapsed so now there’s a large sinkhole between this bridge and the cave beyond.  From a platform, you can look down into another sinkhole that serves as the entrance for humans to the cave:

As you descend the stairs you can feel the temperature drop a bunch just in the space of about 5 feet.  At the bottom, you squat down and go about 10 feet in and find yourself in a “room” with a “skylight”.  Looking back toward the entrance:

Looking into the main part of the cave: 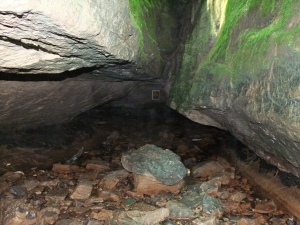 I didn’t have a flashlight so I went no further and suspect I would have encountered a gate before getting far anyway.

I then headed off to do a circuit of the Spring Brook and Deer Run trails.  They were nice enough, and in stark contrast to the Icebox were pretty much uninhabited.  I didn’t encounter another person for about 2 hours.

After that, it was on to the Karst Trail.  This started with about a mile of open prairie and on a sunny 95 degree day it became pretty unpleasant.  Once in the woods you see pretty much the same stuff as on the Sinkhole trail but it’s all just smaller and fewer.

I was ready to call it a day by then so I headed north of Columbia to Finger Lakes State Park to find a place to camp.  I was fortunate to get there when I did because 15 minutes later they were full.  This park has about 70 miles of ATV trails and apparently includes a professional-level motocross track.  There’s also a 2.5 mile hiking & mountain biking trail (Kelly Branch) that I intended to do Sunday morning.  As I expected, the area was very noisy.  In the campground motorcycles and ATVs were everywhere, heading to or from the trail, or at a camp site being repaired or tuned.  It was like sitting inside a giant beehive, I think.  It started raining about 7:30 PM and that quieted things.