Friday’s high was 89 and Sunday’s was 69.  The long-range forecast has mostly 60’s and 70’s for the rest of the month.  Backpacking season has finally arrived!

I was to kick-off the season with an overnighter in the Upper Buffalo Wilderness but plentiful precipitation on Saturday turned it into a day-hike on Sunday instead.  I was part of a group of 10 that hiked in to Smith & McClure falls.  There was surprisingly little water flowing – perhaps the rain runs-off very quickly and one needs to be there during or just after a shower for the real show.

I couldn’t get any useable pictures of Smith Falls from above due to lighting problems, vegetation, lack of good vantage points etc.  Getting below the falls is apparently a pretty arduous trek so we skipped it this time.  As usual, Tim Ernst has some of the best pictures.  I did get a shot of the valley below.  I think the Buffalo River runs from right to left at the base of that mountain. 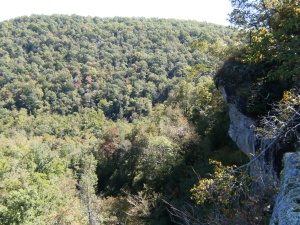 It was easier to get below the upper part of McClure Falls, though some members of our expedition chose to take a shortcut.

Bowers Hollow Falls were also on the menu but we were running short on daylight and skipped them this time.  There’s an awful lot to explore here and I’ll certainly be back.