I got the “one more mild weekend” I was hoping for and spent a couple days of it at Cossatot River State Park & Natural Area sightseeing and hiking the 12.5-mile River Corridor Trail.  Cossatot is apparently an anglicization of the french words for “skull crusher” and it seems a fitting name for this wild river. 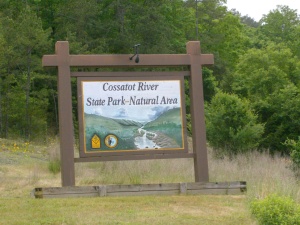 The river gauge was at about 3.0 feet during my visit, which seems to be pretty typical except right after a rain.  I camped in one of the seven sites at the Cossatot Falls campground.  This is just above and pretty close to the falls so you hear the water all the time – nice background noise for sleeping.  I had site #2, which was split into two pads.  In the closer south wing is the spacious great room with wood-burning fireplace and grill, while the north wing is the master bedroom suite.  Of course, no matter where you are there’s a bathroom nearby. 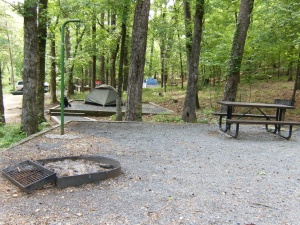 I was eager to set-up camp ASAP Friday morning to ensure I would get a site and was amazed that even on Saturday night there were still only 3 sites in use.  Maybe the place gets busier in June.

My goal for day 1 was to hike to the south end of the trail – the old low water bridge just south of US-278 – and back, about 11 miles.  This part of the trail is mostly far enough from the river that you won’t even know it’s there.  It’s still a nice hike but the only vista-like area near the trail is this one near the end of Deer Camp Rapids. 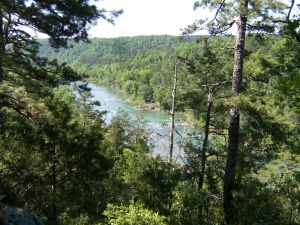 The trail also crosses a road that goes to Deer Camp and provides easy access to the river at the bottom of the rapids.  The road is gated and closed but there are picnic tables, a shelter, fire ring, grill, port-a-potties, etc here.  I don’t know what the story is. 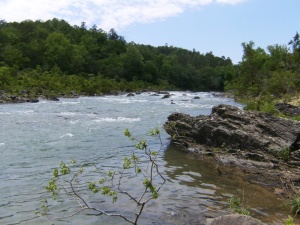 Eventually, you cross under US-278 and arrive at the low water bridge (which is closed to vehicle traffic).  On the west side you’ll find toilets, at least one official camp site, and a road leading up to the visitor center. 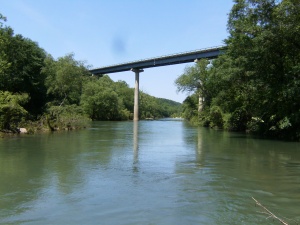 To get to Cossatot Falls from the campground you head south on the trail and take a right on a spur after the second bridge.  It’s probably no more than 200 yards.  There is a gravel bar along the shore interrupted by outcroppings, some of which continue clear across the river, forming the falls.  I was able to easily walk & scramble down river about 3/4 of the way to the bottom of the falls.  Getting further might require some climbing skills.  I think the only way to see the entire falls area at once is from the air. 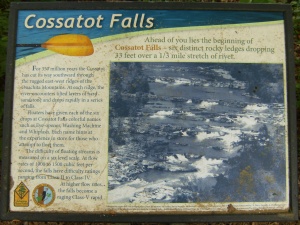 Here are pictures I took looking up and downstream as I made my way downstream.  I can’t imagine going through this in a kayak but apparently people do manage.

The plan for day two was to hike north to the AR 246 trail head and back – about 14.5 miles.  Along the way was one of the nicer bridged areas.  This creek was very steep with large pools above and below the bridge and many more cascades above and below them hidden in dense vegetation. 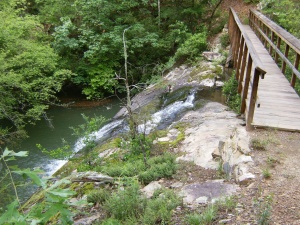 As I approached a set of rapids that I think is called “The Esses” I managed to make my way down the hillside and out on a bluff to another nice vista.  There’s an island here with most of the river flowing around the near side.  Down below were three kayakers resting-up before heading down river.

A little further on is the Ed Banks area.  The low water bridge is in bad shape and closed to motor traffic but the trail passes over it, water levels permitting.  There is a toilet on the east side and a campground on the west side that I didn’t explore. 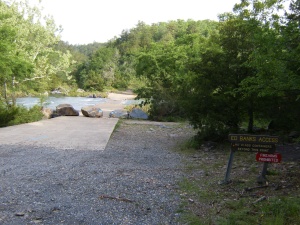 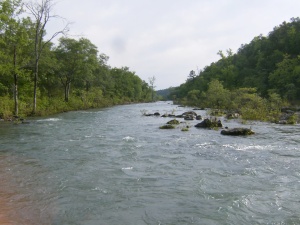 At a bridge crossing about .75 miles from the north end of the trail I treed my first raccoon.  His cousins at the campground were not nearly as shy. 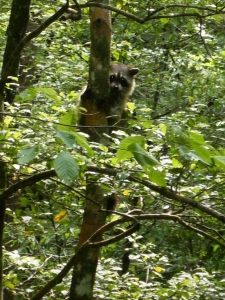 Here’s the view looking downstream from the footbridge high above the river at AR 246.  A person can continue across the footbridge and then north under the AR 246 bridge into the Brushy Creek Recreation Area (day use only). 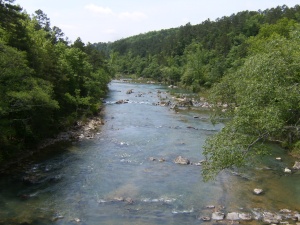 My only disappointment with the trail is the lack of easily-accessible vistas where you can really see the dramatic parts of the river.  Perhaps the state doesn’t want to encourage people to scramble down a steep hill covered with loose rock toward a ledge 40-60 feet above the rocks or river?  I dunno.  I was initially concerned that the 39! wooden bridges might have “wimpified” the trail but now agree that it was the right thing to do, and it’s still a good challenge.  The trail is still young and generally in good shape.  I cleared away a lot of small brush and don’t recall any big stuff that required a detour.  There was amazingly little trash on the trail – I expected to find a lot near the access areas.   There were a lot of people hanging out at all of the river access areas Saturday but I saw no one else on the trail Friday and only one person Saturday afternoon so that’s where the solitude is.

I still had one day left of my weekend and decided I would head west on Sunday to Broken Bow Lake in Oklahoma to look around there and maybe hike a bit of the David Boren trail in the Beaver’s Bend area.  On the way out of the Cossatot area, I drove over to the Sandbar Campground and found it deserted.  15 pad sites plus a walk-in area, and no one there.  Amazing.

Since I had only been south of the Ouachita Mountains once, briefly, two week ago and I had just started reading the award-winning Sawmill: The Story of Cutting the Last Great Virgin Forest East of the Rockies I decided to take the long way to Broken Bow – east and then south to Dierks, where I found where many of the local trees have been going when they die… 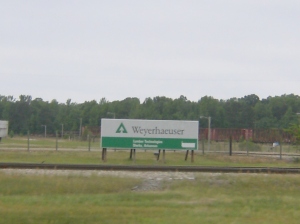 …and then through DeQueen.  As I approached Broken Bow it occurred to me that with just a short detour I could add another state to my “visited” list so I turned south and crossed the… 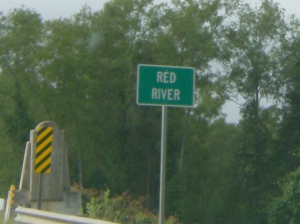 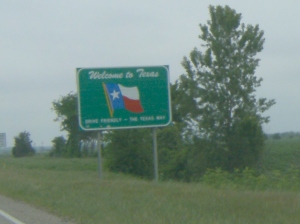 Yee-f*#king-haw!  Now to get back north, and back to the serious business of hiking.