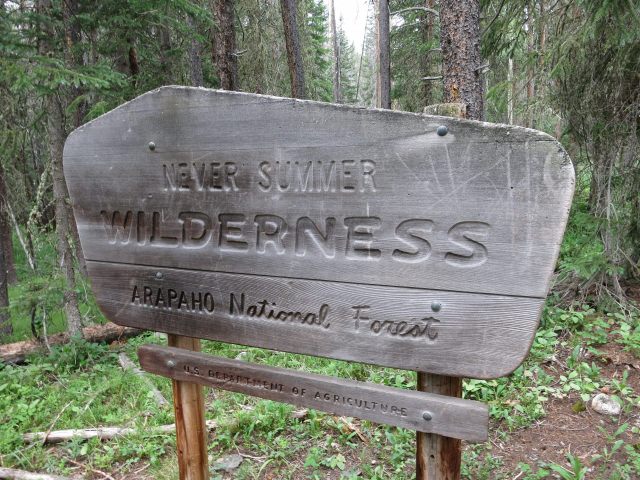 Colorado’s Never Summer Wilderness borders Rocky Mountain National Park on the west.  7 of us did a 2-night trip along the Baker Creek, Baker Gulch, and Parika Lake trails.  Highlights included great scenery, mostly-good weather, wildflowers, more moose than any of us had seen before, and a bear!

We started at the Bowen/Baker trail head on US-34 north of Granby.  It’s inside RMNP so the entrance fee must be paid.  We hiked about a half-mile west , crossing the Colorado River (about 10 miles from its source) on a bridge before leaving RMNP and entering the Never Summer Wilderness.  We continued west along Baker Creek with a gentle uphill grade for several miles before turning north into Baker Gulch a short distance and setting up camp.

Along the way the trail crosses the Grand Ditch – a man-made ditch that diverts water north east across the continental divide to Long Draw Reservoir, where it provides water for several Front Range communities.  It looks like quite an engineering project.

It rained off-and-on during much of our hike in, stopping just before we set up camp.  Shortly after, a moose cow and calf wandered into the meadow to graze and check out the strange objects that had appeared.  After dinner, while most of us were watching a group of 5 other moose graze nearby, one our crew was off with his pants around his ankles when a black bear approached him.  A bit of yelling and gesturing drove the bear off, but it appeared a few minutes later along the tree line on the far side of the meadow.  All the moose turned to watch it – probably smelling it before we even saw it.  Others got pictures of it but I didn’t realize what was going on and only caught a brief glimpse.

On day 2, we day-hiked further north in Baker Gulch to Baker Pass (11253′) and the continental divide, southwest to Parika Lake, and back to camp in Baker Gulch.  Near the pass are the remains of a mine from which feldspar and mica were extracted.  The pile of tailings had many large chunks of mica and really glittered in the sun.  Parika Lake is apparently a very popular destination but was just a pretty typical mountain lake.  We saw 3 more moose grazing some distance away.

The upper part of Baker Gulch

The old mine near Baker Pass

Looking back down Baker Gulch

Longs Peak far to the east

On day 3 we hiked out.  One last moose appeared, probably to say goodbye on behalf of his brethren. 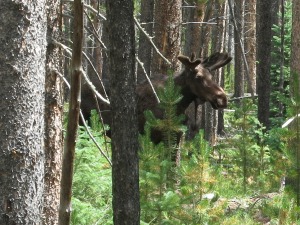 After a great lunch at Sagebrush BBQ & Grill in Grand Lake, most of the group headed home but RC and I stuck around for another little adventure.