I spent the weekend at Indian Cave State Park in SE Nebraska.  It was officially an Adventure Club trip but only one other person participated out of the 6 or 7 that were signed-up at one point.  It was an excellent opportunity to watch the bald eagles.  I could have brought binoculars, my good camera, even a tripod, but for some reason I didn’t think about that.

We were last here in July when it was hot and humid, the river was flooding, and the hills were alive with the sound of mosquitoes.  None of that was a problem this time!  We drove up Saturday morning and backpacked in to the big group camping area on top of the bluff overlooking the Missouri River valley (flushing about 2 dozen turkeys) and set up camp.  After watching the eagles in the trees below for a while we  hiked the History Trail – a loop that goes up through the “old town” area.  It was surprisingly challenging, with several large hills.

Our camp area was a large clearing and the night sky was clear, the moon rose very late, and there was very little light pollution from surrounding towns so the stars were visible in a way that I hadn’t seen in at least 30 years.  It was pretty awesome and has me thinking about a trip to the Flint Hills for even more expansive sky views.

Sunday, we packed-up and headed further south on the Rock Bluff Run trail to a trail head and researched some of the other camping areas on the way.  After driving down to the boat ramp area we hiked the part of the Hardwood Trail that goes along the top of the bluff then looped back behind the bluff.  Once back to the car we drove down to the “cave”.  It’s really just an area where the sandstone was scoured-out, leaving an overhang.  There are reported to be old petroglyphs but mostly there is contemporary graffiti.  It’s a shame.  We hung around there on the river bank for a while, watching the eagles and then headed home.

At 2.5 hours, it’s a much shorter drive than any of the Missouri wilderness areas and yet it can still feel very remote, is heavily wooded,  and has interesting terrain.  There is still a lot of the south end of the park I haven’t seen so I will definitely be back, but not in July!  :-).

...and the obligatory sunrise-over-the-camp photo

It only looks like he's on the cell phone

The stairs up to the "cave" 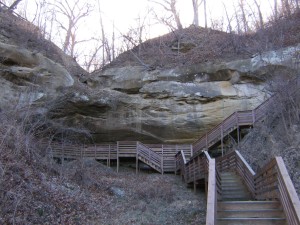 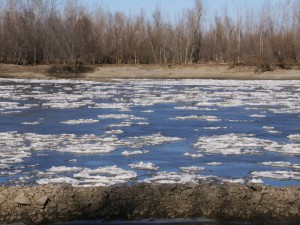 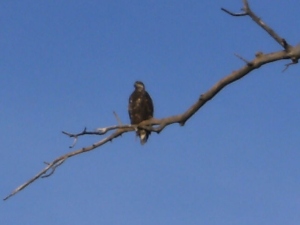 The only decent eagle photo I was able to get