I spent New Year’s weekend backpacking with a buddy in the Ouachita Mountains of Oklahoma and the weather was just incredible – around 70 on Friday & Saturday, about 60 on Sunday, but rather chilly on Monday.  Clouds were rare, precipitation was absent.  Our objective: the 22 mile Boardstand Loop, consisting of the Old Military Road Trail, the Boardstand Trail, and part of section one of the Ouachita Trail.  We planned to start in Talimena State Park and proceed clockwise.

With breaks, it took us about 7 hours to get there heading down US 69 into Oklahoma and then a combination of I-44, Muskogee Turnpike, I-40, US-59, and US-271.  I had never been south of Pittsburgh KS on US69 and had never been in that part of OK so I saw a lot of new scenery.  I-44 is at least partially a toll road and the screwiest one I’ve seen yet.  I got the usual ticket when entering but after driving about 25 miles encountered a toll booth where you pay a $3.50 toll that assumes you’re going to Tulsa but you can ask for a receipt if you’re exiting earlier.  My exit was only about 2 miles away so I got the receipt, went down the road and exited, handed the receipt to that toll booth attendant, and got $2.00 back.  WTF?

The trail climbs from about 950 feet to 1420 feet, where it crosses the highway (Talimena Scenic Drive) at the Old Military Road Vista.

The first vista. Looking south from near the top of Winding Stair Mountain on the Old Military Road Trail. 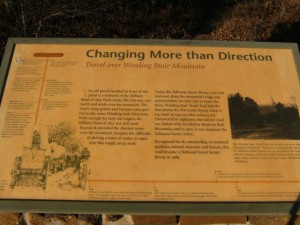 It then proceeds down the other side along the old road bed into Boardstand Flat.

A rubble wall supported the outer edge of the old road on steep sections. Much of it is still intact 175 years later. 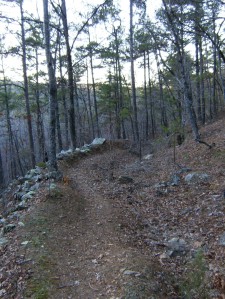 This section was badly eroded but much of the old road still looked like a road.

We only hiked in about 3.5 miles before setting up camp.  We found an area on a ridge that was pretty flat and already had a fire ring so that seemed like a good place.  This was the first outing for my new tent – a Big Agnes Copper Spur UL 1.  It’s roomy with a large side vestibule so I’ve been ogling it for awhile but balked at the price and then found a good deal on the 2011 model at BackcountryGear.com.  This takes another 3 lbs out of my pack FTW!

November was wet so water was plentiful down in the flat. 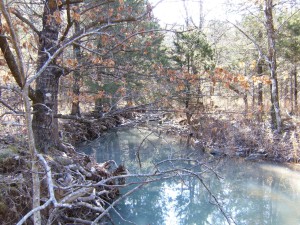 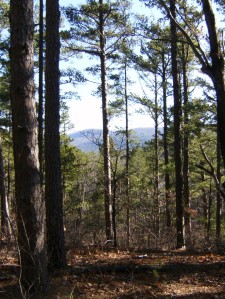 Camp #2 (on New Year’s Eve) was near Redbank Creek, where we’ve just barely started the climb back up Winding Stair Mountain.  Total mileage for the day was about 9.5.  Once again we found a site that already had a fire ring but it was too windy to light a fire so I had to look at the stars instead.  🙂

We started New Year’s Day with a climb from 870 feet to 1440 feet, where the Boardstand Trail intersects the Ouachita Trail, then proceeded west through a boulder field and up another 160 feet to Deadman’s Gap.

The boulder field near the top on the south side of Winding Stair Mountain. Very tough hiking!

Looking south from the north side of Winding Stair Mountain, near Deadman's Gap

From there, we cross the highway again and head west across the north side of the mountain, climbing to about 2200 feet near the Panorama Vista.  That 1330 foot climb was a pretty big deal for a flat-lander like me but the guy I was with has done many 14’ers in Colorado and wasn’t so impressed.

I don't know yet what it is, nor whether it's blooming late or early but I think it's the only flower I saw the whole trip.

Rock gardens like this were very common on the north side 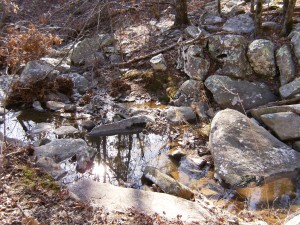 Frazier Creek. One of only two water sources we encountered on the north side.

Camp #3 was in the established Frazier Creek site.  Total mileage for the day was about 6.

Monday morning I awoke to a reading of 29 degrees on the thermometer but I’ve dealt with worse.  We had breakfast, broke camp, and hiked out the remaining 3.5 miles.

On the way home I went east on the Talimena National Scenic Byway (that we had crossed twice while hiking).  There are many places where you can pull off the road to take pictures, and wow, what scenery!  My attempts to stitch-together panoramic shots have failed so here’s 4 of the better photos: 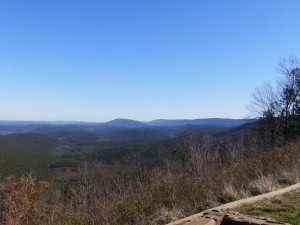 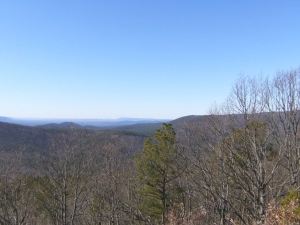 After descending the east end of Winding Stair Mountain you climb onto Rich Mountain and near the east end of that (after crossing into Arkansas) is Queen Wilhelmina State Park, a pretty neat looking place that provided us with a large, tasty,  and very reasonably-priced lunch.

The Ouachita Trail crosses through the park so the lodge gets many visitors from the trail looking for a good meal and maybe a shower and comfy bed for the night.  I hit US-71 just north of Mena and headed for home.  All the way up to Fayetteville was new territory for me and there was some nice terrain there.  I know I’ll be back in that area eventually to see Devil’s Den State Park and a couple other interesting-sounding places.

For awhile I had been using both a filter and Steripen to treat my drinking water.  Some might think that to be a bit paranoid but I wanted to be sure.  I left the filter at home for the Devil’s Backbone trip since it was going to be so cold (and ceramic filters react badly [crack] if frozen wet) and relied solely on the Steripen.  I liked the weight and bulk reduction and elimination of that maintenance and best of all, didn’t get sick.  I’ve been contemplating abandoning the filter altogether so left it behind again this time but the Steripen failed on day 3 so I fell back to using chlorine dioxide tablets.  I had never used them before but know people that have used only them for several years.  The taste was acceptable and they are so small, light, and simple that it’s very tempting to now abandon the Steripen too.  Update:  The Steripen was failing even after putting in the unused spare batteries that I carried in my pack, but now works okay with some newly-purchased batteries.  Both pairs of “old” batteries show correct voltage when tested and function in a flashlight.  I wonder if they were adversely affected by cold temps or something.

1 Response to A Ouachita New Year