The Irish Wilderness – sounds like the perfect place to spend St Patrick’s Day weekend doesn’t it?  It’s an annual outing tradition for the local Sierra Club and this year there was a group of 7 participating.

We did a 17 mile part of White’s Creek Trail from the Brawley Pond trail head counter-clockwise to Camp Five, with overnight stays near Bliss Spring and Fiddler Spring.  Temperatures were amazing – from low 60’s to upper 70’s.  Such a big change from last weekend at Paddy Creek where it was below freezing one morning.  We had fog Saturday morning and a couple sprinkles and some thunder that afternoon.  I didn’t need the fleece or down jackets and didn’t even have much need for a sleeping bag!  The wildflowers were starting to bloom, along with the red buds, dogwoods, and nine barks.  Oh yeah, the ticks made an appearance as well.

The camping area at Bliss Spring (down the spur, not right at the spring) had several big trees down, covering some of the prime tent sites.  I ended-up in a place that was pretty level with soft ground but hemmed-in by underbrush.  The camping area at Fiddler Spring was bigger and I found a much better site.

To get to the Brawley Pond trail head, Google Maps had me go south on Mo-J and turn right on County road 164 to go 3.8 miles WNW into the town of Wilderness.  Don’t do it!  About 5 miles before you hit County 164 bear right on Mo-K going SSW into Wilderness.  This is the quicker and shorter route and a much better road.  Country 164 is rough, to put it mildly.  This is one of the better sections – and I had to get out to move logs off the road: 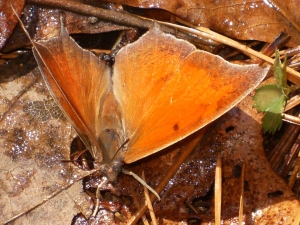 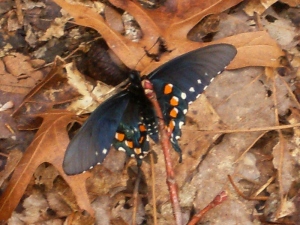 A newly-emerged Pipevine Swallowtail? The wings have not yet fully unfolded.

May Apple, aka Mandrake 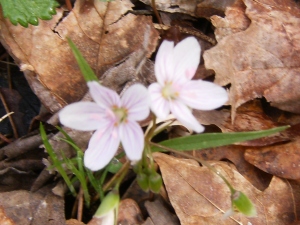 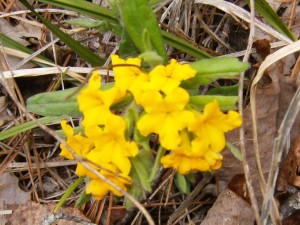 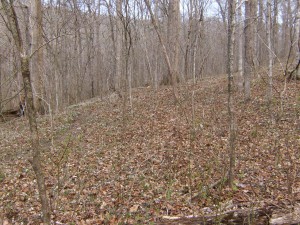 So many little white flowers, as if popcorn had been dropped from the air.

The chimney is about all that's left of the old homestead at the Bliss Spring camp. 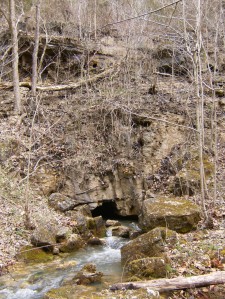 This is where Bliss Spring flows from the hillside. 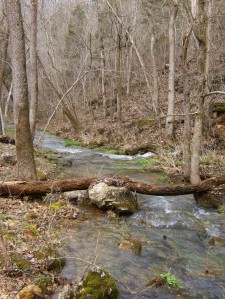 Looking downstream from the source. Another part of the spring flows in from the right. 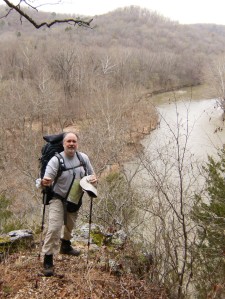 Me on "the overlook" with the Eleven Point River below.

A bluff above White's Creek pockmarked with small holes.

Fiddler Spring flowing from the hillside

Walking across the dam at Camp Five. The hike is almost done and the long drive home is about to begin.

White’s Creek Trail basically only covers the northern half of the area so there’s still much to see there.  I’m looking forward to the return trip next spring.

For the traditional post trip feast, I found a homey-sounding place in Winona – apparently the town’s only restaurant – but it was closed.  We drove on to Mountain View but the only places open were fast food chains.  No thanks, and on to Willow Springs where we found the Open Range Steakhouse 30 minutes before they closed.  They’ve got steaks, burgers, BBQ, even a bit of Italian cuisine, and some awesome desserts.  The service was good and portions were large so I wasn’t the only one that felt like I was going to burst.