I hiked roughly the eastern half of OHT section 1 today – from Dockery’s Gap to the western Shore’s Lake spur.  The other mile or so east of that point (plus the western end of section 2) was hiked last year as part of the whole Shore’s Lake Loop.  I was alone with no shuttle so I had to hike back too, making it a 15 mile day – the longest I’ve done in quite a while.

FR 1007 headed north toward Dockery’s Gap is paved except for the last 2.5 miles and even that is in very good shape so the trail head should be accessible by any vehicle.  There is a parking area for 6 or 7 cars.

I started in the fog at dawn with a rather steep 500′ descent to (yet another) Hurricane Creek then a long climb of about 1000′ to Richason Mtn where the terrain remained relatively level. 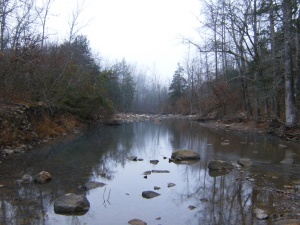 I think it was just east of mile marker 15 that I encountered a large area of blow-down.  The trees have been cleared from the trail but the area is now becoming a huge briar and sumac thicket.  This will probably require a lot of maintenance for many years. 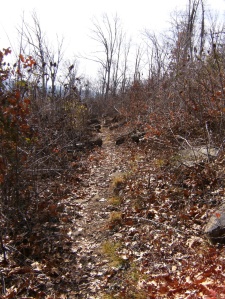 A glimpse of the southern end of White Rock Mountain.  In better light, the lichen-covered bluff capping the mountain looks almost white.

I don’t see too many of these alive.  When it saw me it went bounding into the brush much faster than I imagined possible.  If only they crossed roads that quickly…

The 500′ climb back to the trail head at the end of the day left me with a major case of Rubber Legs.  I’ll return to Richason Mtn at some point to find Mullers Spring and explore the upper part of Falling Rock Hollow.

All I’ve got left to hike in section 1 is from Dockery’s Gap west about 4 miles to the end of Jack Creek.  That will be a much easier hike!