One way to ensure you catch the fall colors at their peak is to just spend the whole darn “peak week” out in the woods.  I did just that with another week hiking and building trail along the Buffalo River.

My week in the woods began Oct 26th with a day-hike with other Ozark Society members from the Steel Creek Campground east along the Buffalo River Trail (BRT) to Beech Creek, then north on a horse trail across the river to the Old River Trail (ORT), east to Jim Bluff for lunch, then west on ORT back to the starting point with 5 more crossings of the river.  I helped clean-up much of this part of the BRT last fall so it was interesting to see it again.  There are two new trees down on the trail but it still looked good other than that.

Big Bluff. There a a couple people on the Goat Trail just above the center of the picture.

After the hike I headed to the Tyler Bend Campground and did reconnaissance of the the Woolum Campground on the way.

Tyler Bend is the base for Ken Smith’s Buffalo River Trail construction efforts this season.  American Hiking Society provided a crew for the first week (Oct 20-26) and Oct 27-Nov 2 was the official Buffalo River Alumni week though some of the alumni arrived a week early and will stay a couple weeks later.  The alumni are those with previous experience on the BRT and this week included people from Arkansas, Wisconsin, Texas, Oklahoma, Missouri, Iowa, and Illinois with about a third of them being women.

This season’s work area is a short distance east of US65 on a segment that loses several hundred feet of elevation as it descends into and switchbacks through a small hollow.  There are two overlook areas, a cactus glade, a hollowed-out area under a 30-foot waterfall (dubbed “the amphitheater”),  and some steep terrain.  It’s a mighty nice place to work.

Overlook #1 – in a power line cut well above the river valley. 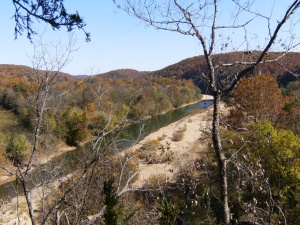 Overlook #2 – lower elevation and out on the end of a ridge.

I got in 5-6 hours of work on Sunday while many new people were arriving and those that had already been there had a day of rest.  Our full crew of 22 worked a full day Monday.  On Tuesday we only worked about 2 hours before heavy rain made us retreat.  The rain ended by the time we got back to camp and a few of us hiked the trails around the Tyler Bend area after lunch.  On Wednesday the area we had been working was still too wet so we maintained trail that had already been built.  12 of us went to the South Maumee trail head.  Half the group headed east, the rest (including me) went west, lopping brush, clearing fallen trees, etc on a segment that was complete but not officially open. 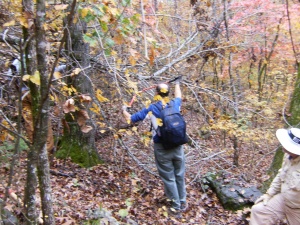 We spotted this cute little fella near the trail.  Most are probably hibernating but this one might be looking for just one more snack before bedtime.

Thursday was our rest day but I didn’t need any rest so I and another guy hiked the trail from AR 14 (Dillard’s Ferry) to the South Maumee trail head.  There are some great views from atop the bluffs… 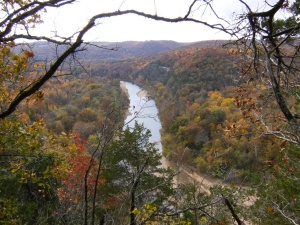 …and in the hollows too.

There is a really spectacular cluster of box canyons that merit further exploration – it features several waterfalls in the 50-70 foot range.

On Friday we got back to building new trail.  On Saturday, many alumni went home but another group of Ozark Society people arrived for a single day of work.

I left Sunday morning (Nov 3) but took the long way home with a trip to Buffalo Point to hike the Indian Rockhouse trail.  The Rockhouse is a very large overhang where native inhabitants lived for some time, similar to Cobb Cave in Lost Valley State Park.  None of my pictures were able to capture it properly so you better see it for yourself.

Later in the day I did some reconnaissance around the edge of the East Fork Wilderness.

I’ve got a topo map of this place but it doesn’t show any official parking areas or access points.  I located two on the east side along FR 1301: Sycamore Creek and Dean Ridge.  The first one is by far the easier to use.  It looks like there are also at least two places where you can pull-off from AR 27 onto old logging-type roads and park.  This is another one of those occasions where a GPS device would have been useful to record locations.

South of the wilderness on White Oak Mountain there is an area where you can pull off the road for a nice view and walk down a few wooden steps to a deck with a couple picnic tables.  This is looking south, I think, over the Arkansas River valley into the beginnings of the Ouachita Mountains.

This is looking kinda southwestish, towards Russellville, Lake Dardanelle, and probably the nuclear power plant:

The camp will be set up at Tyler Bend at least one more weekend and maybe two, and after that work will apparently shift to Saturdays only.  Things will start up again in earnest around mid-March ’14.

1 Response to Autumn ’13 trail building on the Buffalo River