The largest known cave system in the world.  It’s pretty big.  One might even say it’s mammoth, and it was kinda on my way home from Virginia so I figured I had to stop at Mammoth Cave in Kentucky.

I took the 2-hour “Domes and Dripstones” tour.  It enters through a sinkhole and descends 280 stairs that were just built in the late 80’s so it’s the newest public entrance.  The 2-hour “Historic” tour goes in the original natural entrance but that was sold-out until late afternoon (a 7 hour wait) so that didn’t appeal.  My pictures were much better than the last time I tried cave photography but most were still blurry or I just couldn’t make sense of what I was seeing.  A tripod is needed but not permitted.

There were features like Grand Central Station – a large room with 6 or 7 entrances, Frozen Niagara, The Drapery Room, and many others I’ve now forgotten.

A model of part of the cave

Descending into the sinkhole and the entrance

As I was diving into the park I went through an area where there was a turkey feeding on each side of the road.  They weren’t at all concerned when I stopped to take a picture and were still there about 3 hours later despite all the car and bus traffic. 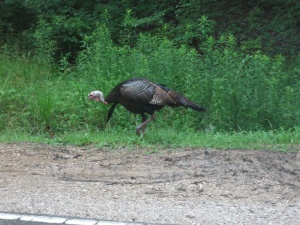 They make whiskey out of these, or something like that.

After leaving the cave I passed through Bowling Green and almost went for a tour of the Corvette Museum, but decided to just get the heck home instead.