This year’s trip in Wyoming’s Wind River Range was 7 days in the Fitzpatrick Wilderness, in the northeast area.  Starting at the Trail Lake trail head south of Dubois, we ascended south into Bomber Basin to near Turquoise Lake, then east over a saddle into the adjacent basin, then descended north past Lake 10359, Mile Long Lake, Upper Ross Lake, and Ross Lake.  Both of these basins were gouged-out by glaciers and it really showed, with the characteristic U-shape and lots of grooved granite slabs. 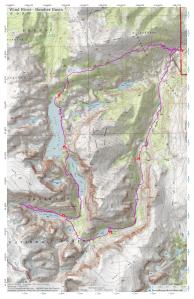 Nancy Pallister’s great book describes the route (#42 in 2nd edition) as 22 miles but most is off-trail so we expected some tough slow hiking and that’s exactly what we got.  Oh, and some snow too.

Accomplices this year were RC and CC, both also on last year’s trip.  We arrived in Dubois in the early afternoon so we had some time to look around at the various shops and especially the Bighorn Sheep Interpretive Center.  The largest Bighorn herd in the US lives on Whiskey Mountain, which overlooks the town.  Our route would end with a trek across the mountain and we hoped to see some sheep.

Day 1: We follow the Bomber Basin/Glacier Trail south into Bomber Basin, on the east side of East Torrey Creek.  After about 2.5 miles the Glacier Trail branches east.  At this point we can see Bomber Falls. The Falls and Basin were so-named because of a B17? bomber that crashed near the top of the Falls in WW2 while on a training mission.  We continue about another mile to have lunch near the base of the falls.  Too many trees to get a picture of the waterfall, in fact we can’t easily get close enough to even see it.  The Beartooth Publishing map shows the trail ending here but it actually continues, climbing about 600′ around a knob.  From the top of the knob we can see what is apparently some of the bomber wreckage by the creek below.  We continue about another .5 mile before setting up camp.  It looks like we’re getting close to the area devastated by a burn in 2004 and camping is unlikely there.  We saw 4 people today – 2 dayhikers that passed us on a round-trip to Bomber Falls, and two backpackers above the Falls headed north.  It begins raining lightly during the night.

The bridge over Torrey Creek

Looking upstream from the bridge

Our first view of Bomber Basin

The top of Bomber Falls comes into view

CC checks out an old cabin

Day 2: We awake to a temperature of 30 and a mix of sleet and freezing rain with a few snowflakes thrown in.  It warms a bit and we have rain off and on the rest of the day.  We quickly get to the burn area and the trail disappears.  There are lots of trees on the ground, hidden by wet knee-high grass.  We cross a swampy area and then to the west side of East Torrey Creek.  The walking isn’t much easier over here – still lots of deadfall and wet areas.  Very slow going.  We encounter a medium-size (probably black) bear near the creek.  It’s 50 feet away and headed almost straight at us but apparently doesn’t see us until we yell.  It turns and runs away.  We encounter our first big boulder field.  We can’t get around it along the creek so we climb up to go around the top and stay high for awhile.  There’s a granite wall ahead and it becomes clear we have to descend.  After getting back down by the creek we run across the old trail.  We turn west as the basin narrows considerably and begin climbing toward Bomber Lake.  It begins snowing a bit before we wade across the outlet, which is one of the diciest crossings we’ve ever done.  We find a good camp site on the southeast side amongst the trees.  We are all exhausted after going only 4 miles.  Heavy wet snow continues until about 8PM.  No pictures – the camera was in the pack all day due to the weather.

Day 3: We follow a path along the south side of Bomber Lake toward the inlet and then ascend along the creek up into the woods.  At a small pond below Turquoise Lake we lose the path and set off cross-country to the saddle below Spider Peak and cross into the adjacent basin.  We descend to Lake 10359 (so-named for its elevation), cross the outlet, and head for Mile Long Lake, where we camp on the north side near the outlet.  Most of the day was off-trail.  Much route-finding and boulder-hopping but the weather was great.

Looking back at Bomber Lake

Spider Peak, with our saddle to the right

In the saddle, looking down toward Lake 10359

Day 4: We stay at Mile Long Lake.  We hike to the upper end of the lake and ascend West Torrey Creek.  The Continental Glacier is at the top but we stop short at a snow field at 10800′.  On the way back down we see a moose at the upper end of the lake and end up “chasing” him down the trail.  RC got out his brand-new Tenkara rod and got his fly wet.  When I go to bed I discover my air mattress has a leak.

Looking back at Mile Long Lake

Mile Long Lake, from the inlet

Day 5: CC’s air mattress has also sprung a leak.  Below the Mile Long Lake outlet we find a really good path leading to the upper end of Upper Ross Lake.  We see 2 backpackers headed up to the lake but they don’t see us.  We lose the path through a wet area but find it again later.  Very easy walking so far.  I make a wrong turn and lose the path at a boulder field, thinking it’s where we need to climb up and around the outlet of Crystal Lake.  This costs us a lot of time and energy until we realize there is no way around above.  After descending we find the path again.  We finally arrive for real at the boulder field below Crystal Lake and decide to follow the path along the lake instead of ascending and going around as Nancy Pallister advises.  The path soon disappears (just as Nancy said it would) and leaves us bulldozing through the vegetation and hopping across the wide end of a huge boulder field.  We decide maybe it will be simpler to ascend and cross a narrower part of the boulder field.  Once we finally get through that we can see that we are near the end of Upper Ross Lake, though still way above.  We descend through the trees and eventually stumble into the “timbered flat with swampy spots” that Nancy described.  Here we find paths leading to the outlet and some much easier walking.

We cross the outlet on a pile of logs and head along the northwest shore of Upper Ross Lake in search of the gully that leads down to Ross Lake.  There is a path for much of this, though it disappears through a burned area and then dumps you into yet another small boulder field.  At the bottom end is a broad flat area near the inlet of Ross Lake where many people have camped before.  We decide to stay there instead of continuing a bit farther to the possibly-more-scenic peninsula.  This was another long and exhausting day, covering only about 3.5 miles.

CC slides under a tree to drop through the slot

Part of the endless boulder field

The outlet of Upper Ross Lake, with Ross Lake behind

Day 6: Our destination is the camp sites a little north of the Ross Lake outlet.  It’s about 1 mile so we think this will be a pretty easy day.  We follow a path along the lake to a huge granite outcropping just before the outlet.  It looks like there’s a way to get around it but it’s very risky, with a mistake sending one sliding down into the lake.  We spot some cairns marking a way up and over that looks better.  The outlet of Ross Lake is impressive.  I can see the water cascading away through a deep channel and then disappear over what must be a heck of a waterfall.  We cross on a pile of logs.  There’s another big granite outcrop on this side of the outlet, with a good path leading around behind it.  We’re not impressed with the camp sites we find in the area and decide to head to the north end after lunch.  There’s a level-looking area on the map that seems promising while also shortening the next day’s hike out.

There is supposedly an easy path to the north end about 175′ above the lake but we can’t find it so we drop back down to the edge of the lake and follow the rough path there.  Near the end we intersect the Ross Lake Trail and climb steeply about 150′ before it levels off.  There are many camp sites in the area, one so large and heavily-impacted that I likened it to a KOA campground.  We find a place out of the way amongst some big rocks.  There is no water in that area so CC and I go back down to the lake to get 10 liters of water to last us through tomorrow’s hike out.  It does prove to be one of our easier days, though it still took about 5 hours to go 2 miles.

The waterfall from an unnamed lake

Looking back toward the head of Ross Lake

Climbing the granite wall near the outlet

Whiskey Mountain in the distance

The outlet disappears into the basin far below

Crossing the outlet of Ross Lake

Day 7:  We continue north on the Ross Lake Trail, climbing switchbacks through a steep area to a big meadow on the flanks of Whiskey Mountain.  Here we turn east and hike about 5 miles back to the trail head.  The trail is mostly level until the last couple miles where it drops about 2600′.  We encounter 9 people in 4 groups as we near the trail head.  We never do see any Bighorn Sheep.

Looking back at Ross Lake

A final look up Bomber Basin

We headed home through Riverton instead of Lander for a change of scenery.  Stopped for lunch at the Cowboy Cafe.  We began the trip almost a week earlier with breakfast at the Cowboy Cafe in Dubois so it seems fitting.

The wrap-up:  We were all glad we did the trip but agreed that we don’t want to do that again.  We weren’t eating nearly enough for the amount of work we were doing.  I lost about 5 pounds.  We definitely had solitude.